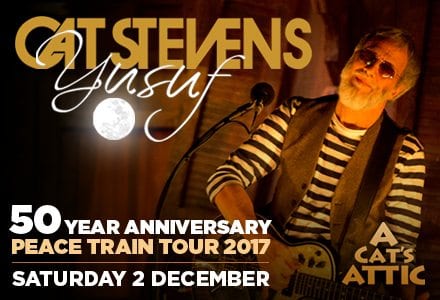 TEG DAINTY and Live Nation in association with Moonshadow Aus Pty announced that British singer-songwriting legend and Rock and Roll Hall of Fame inductee, Yusuf / Cat Stevens will tour Australia in November and December. A Cat’s Attic “Peace Train Tour” commemorates the 50th Anniversary of his first major hit single and debut album Matthew & Son released in 1967. This 50th Anniversary Tour is going to be an unmissable night for fans.

Get up close with Yusuf / Cat Stevens like never before by purchasing an official VIP package.

Packages offer an amazing selection of best available tickets and can include unprecedented access to soundcheck, entry to the official VIP pre show function, exclusive VIP merchandise, a variety of on-site amenities, and more! All of Yusuf/Cat Stevens proceeds from the VIP program will be donated to charity.

Our tours have been designed to showcase the best the Hunter Valley Region has to offer, from internationally renowned and boutique wineries, micro breweries, casual through to fine dining venues, cheese shops, chocolatiers, and shopping villages. Our tours cover the most popular locations in the Hunter Valley as well as the lesser known hidden gems!