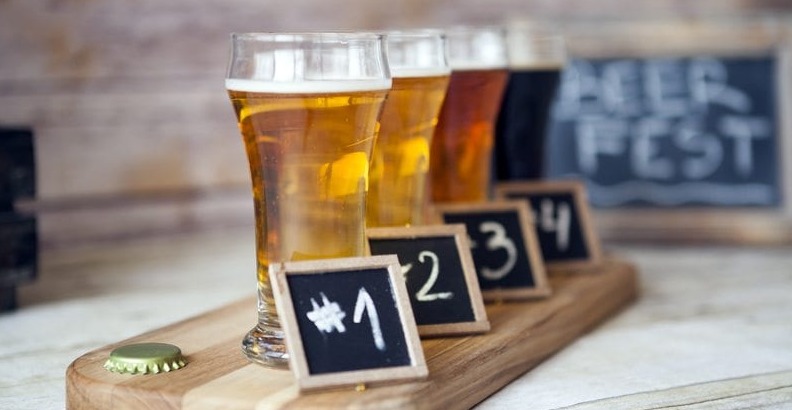 In fact, the Hunter Valley has several award-winning breweries and a number of boutique craft brewers that you can visit, each offering their own selection of distinctive locally brewed beers and special seasonal releases that you can sample.

In many cases, you can go behind the scenes and see how these local beers are made and talk to the brew master for insights into their particular beer-making process.

With an amazing variety of beers and ales from the traditional to the surprising, as well as the region’s popular ciders and ginger beers, you’ll find the Hunter Valley’s breweries just as interesting and diverse as the region’s world-famous wineries.

No matter if you’re a serious beer connoisseur or simply a keen amateur who enjoys trying new things, here are some of the top spots for beer lovers to try on a Hunter Valley beer tour.

The Hunter Valley’s original microbrewery is located at Potters Hotel Brewery Resort. Amazingly, given its prodigious range of beers, the Hunter Beer Co. is one of the smallest breweries in the country.

For the brewers at Hunter Beer Co. it’s all about distinctive handcrafted brews using traditional methods and all-natural ingredients. Though it’s not all traditional, with chocolate beer and bacon beer just two of their unconventional creations. Make sure you have some time because they typically have 10 craft beers on tap for you to try as you watch the beer being made. The tasting paddles are a great way to try a range of brews.

A visit to the Hunter Beer Co. is about the experience. Join head brewer Keith ‘The Beer Guy’ for a casual tour of the brewery and insights into the process. Daily brewery tours run at 4:00 pm. Book directly at the brewery.

The Sydney Brewery Hunter Valley is located in the grounds of the Crowne Plaza Hunter Valley hotel in the central Hunter Valley town of Lovedale, with the popular Lovedale bar and restaurant right next door to the brewery and distillery.

The brewery boasts a vast range of beers brewed on the premises from the finest, filtered Hunter Valley water, which provides the brew masters with a blank canvas to create a wide variety of beers from traditional lagers to rich oatmeal porters.

What to try? You’ll find a rotation of seasonal beers on tap, so there’s always something new and different to sample. Staples include the brewery’s popular Lovedale Lager – a traditional Munich-style lager that combines three types of German hops to create a smooth citrus aroma complimented by a slightly toasted malt backbone. The brewery’s famous Sydney cider is on tap everyday.

You can also join a behind the scenes tour of the brewery to see how they do what they do, enquire directly through Crowne Plaza.

Located at the Hunter Valley Resort, Matilda Bay is Pokolbin’s first boutique brew house, and where the story of the popular Blue Tongue brand of beer began. The Resort is also known for its glorious outlook over the Hunter Valley.

The Matilda Bay Brewhouse is another stop where you’ll want to spend a bit of time, with 12 craft brews on tap, including lagers, ales, stouts, cider and alcoholic ginger beer, plus regular ‘special’ brews ready for you to try, all with accompanying tasting notes. Choose a tasting a paddle of lighter or darker style beers to get the full perspective.

The Hope Brewhouse is located at the Hope Estate winery in the heart of Pokolbin, set amongst 420 acres of rolling countryside and picturesque vineyards with stunning views.

At the Brewhouse you’ll find 12 different brews and ciders on tap offering a broad palette of styles and tastes. The brewery’s extensive range of award-winning craft beers and ciders are produced on site. Among a vat of awards the brewery has received for its brews, Hope Brewhouse won Champion Small Brewery at the 2016 CBA Awards.

Sit down and enjoy a sumptuous meal overlooking the brewery area or out in the lovely beer garden set amongst the grape vines as you sample the eight delicious craft beers and cider on offer each day. The taps change regularly, so there’s always something different to try.

If you’re not much of a beer drinker, you won’t be left out. IronBark also makes a range popular apple and pear ciders, or sample a top drop from the Peter Drayton Wines range that are also made onsite.

An evening of Beer, Wine, Cheese and Delicious Food

If you’re looking for a great way to experience some of the region’s best beer, wine and food the Hunter Valley has to offer in one fun evening, join us for iHop’s Taste of the Hunter After Dark Tour.

Kick off with a guided wine tasting with local cheeses at an award-winning cellar door. Then enjoy a tasting paddle of top Hunter Valley brews or ciders (as well as some delicious bites) as you get an insight into the beer brewing process at a local boutique brew house. Afterwards, compare tasting notes over a selection of gourmet wood-fired pizzas, tapas and drinks at a popular local restaurant.

Find out more about iHop Hunter Valley’s Hop-On Hop-Off bus tours and Taste of the Hunter after Dark tour here.